Approached along an ancient avenue lined with seventy-five horse chestnut trees, Salems Golf Club is located on a historically important Högantorp’s farm site. Inaugurated in 1996, Salem 365! is a 27-hole facility considered one of the best in Sweden’s Stockholm region, with the 18-hole Salemsbanan and 9-hole Högantorpsbanan course with summer greens open all year round.

In 2002, a 150-year-old sheep stall was restored and rebuilt as a 1000m² clubhouse. As part of the club’s modernisation and renovation strategy to keep improving golf holes and the overall quality of experience for its members, the irrigation system was replaced in 2019 with work completed at the turn of the year for commissioning in spring 2020. 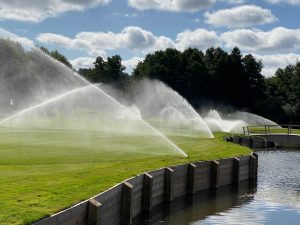 The first 18 holes were built with PVC pipes but these had deteriorated over time and were undersized for the irrigation task. The ageing system was causing problems and resulted in high operating costs. Pipes were constantly leaking, decoders were frequently breaking or reprogrammed themselves, there was poor irrigation coverage due to the block system on greens and fairways, lengthy irrigation windows and it proved difficult to find spare parts for worn irrigation heads.

Greens were irrigated by a block system of full circle sprinklers with areas around greens watered at the same time. This had meant that greens were often overwatered just to keep the grass around the greens alive. 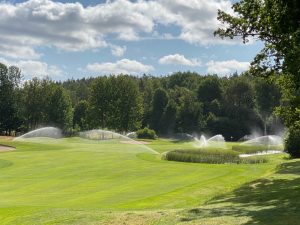 The irrigation renovation involved installing a Rain Bird IC System™ with Stratus II™ Central Control and just over 1000 rotors in all. The unique Rain Bird hybrid solution designed by Stuart Tate allows the 18-hole course on the IC System to run in parallel with the 9-hole course running on a decoder system, effectively running two systems as one.

Having valve-in-head (VIH) rotors rather than heads in a block formation, gives the club better control over irrigation on a rotor by rotor basis. Each VIH rotor has a built-in solenoid valve controlled independently of others on the system with its own operational parameters such as arc of rotation, precipitation rate and operational run-time, with much greater control of the area being irrigated.

The project also included adding a new pump station, a new large well and drum from the irrigation pond and new pump to draw water from Lake Mälaren. At the same time, improvements were made to six holes, including a completely new stretch of the eleventh hole, a new green and a much larger pond at the twelfth and new green area at the eighteenth.

As the course remained open during the first few weeks of the renovation, the challenge was completing work quickly and efficiently to minimize disturbance to the game. As it was also a very wet, rainy autumn, care had to be taken not to destroy the existing course. Course Manager Frederik Eriksson highlighted how important it was to have help and support throughout, from the main contractor KSAB, from subcontractor Modo and from Rain Bird.

Benefits of their new IC System

In terms of benefits, the new Rain Bird IC System™ will be faster, more responsive and more efficient, allowing watering to be adjusted and controlled, depending on the needs of each area of the course. Increased capacity means that the system operating time will be reduced with watering done mainly at night, considerably reducing the impact on the golf game. Previously there were lengthy irrigation windows from 5pm in the evening until 10.30am the following morning. Members were often disturbed during play and sometimes even got wet! Now members will not have to play from very wet bunkers in the morning as these will be watered at an earlier time. The course will be in a far better condition, with fewer wet surfaces and dry spots and grass on surfaces near fairways that were previously very dry. According to the calculations, the club will save 90% in operating costs each season. 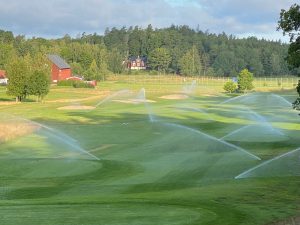 “Previously, several different tee plates were operated by a single valve but with one valve to every tee, all tees get just the right amount of water. Irrigation of greens can now be done more accurately and as part of an overall strategy using TDR moisture meters. With the new pump station, wider mains piping and Rain Bird IC system we won’t be watering where we don’t need to and irrigation windows will be much shorter. We will be able to better control where and how much we water. We’ll have time to other tasks because won’t be constantly repairing broken decoders and pipelines. The most challenging aspects of the renovation project were convincing the board and our members that this was something that absolutely needed to be done and also raising the money. But having modern plant that’s expected to last at least 25 years will reduce the need for maintenance and in the long run we will save money and increase our income.”

Fredrik Eriksson – Course Manager and 2017 Greenkeeper of the Year.