Golf architects Robert Trent Jones Jr have delivered an award winning, ‘soft links’ 18-hole course with tees seamlessly merging into wide fairways and contours of the unusually large greens flowing into the contours of the dunes. Holes are marked not by flags but by red lanterns similar to those that light up the Old Town in nearby Hoi An, the historic port city and UNESCO World Heritage Site just 10 miles away.

The Rain Bird® IC System™ and rotors with CirrusPRO™ control were chosen as being the best option for irrigating what is a delicate site, allowing for layouts to be changed easily with minimal excavations. In order to get every hole ‘just right’ it was important to know that minor relocations during the build phase could be easily accomplished.

As a true links-style course, it is extremely important to be able to put water exactly where it is needed, with precise application adjustments. Utilizing Rain Bird’s individual head control system paired with the fully mobile CirrusPRO™ software, the drought tolerant turf grass is kept in perfect playing condition for firm and fast play while allowing the vegetation surrounds to flourish in a natural environment.

Robert Trent Jones Junior is renowned for being “the father of environmental golf course design” and for the low impact on landscapes he works with. His courses, among the most highly regarded on Earth, have hosted many U.S. major championships – most recently the 2015 U.S. Open (Chambers Bay in University Place, Washington) and the 2016 U.S. Women’s Open (CordeValle in San Martin, California). 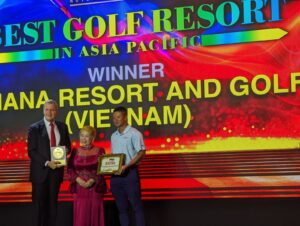