Close to Oslo Airport and 25 minutes from Oslo City, Miklagard Golf is an 18-hole, Robert Trent Jones Junior-designed championship course that opened in 2001. Following construction of a new five-star hotel which began in 2018, course remodeling by (re)GOLF and the Robert Trent Jones design team in 2019 relocated the driving range, 18th hole, and five new holes.

An inland, parkland landscape with elevated greens protected by deep bunkers Miklagard Golf is rated one of the top 100 golf courses in Europe and has hosted the European Challenge Tour, the Canon Pro Series, and the Turkish Airlines World Golf Series. Miklagard means ‘great city’ and is the Viking name for Constantinople (Istanbul) and in keeping with its Nordic heritage, all the club’s holes are named after Norse monarchs and deities.

“What we’re dealing with at Miklagard is literally two courses in one – so the Rain Bird hybrid system allows us to manage the new and the old technologies together in a smarter, more efficient way”
— Duncan Bruce, Golf Course Manager

A Rain Bird irrigation system was installed by contractor Nelson & Vecchio. Groundworks took a while longer to complete than planned given the Covid-19 pandemic which restricted travel in and out of Norway, but finally, in January 2022, Golf Course Manager Duncan Bruce took over the golf course and its new irrigation system. The hybrid system now in place combines decoders in block formation on the old course, with a new Rain Bird® IC System™ on the six new holes, all controlled by one 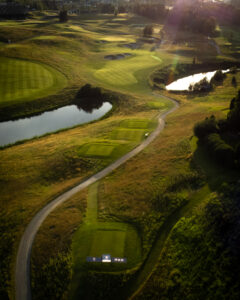 Rain Bird Central Control with a Rain Bird GSP plan providing back up.

As the season in Norway is short and intense, it’s been a steep learning curve since the start of the year; getting to know the holes, levelling heads where winter frosts had moved the ground as well as putting the finishing touches in place, fine-tuning the way the system performs in a short season. Having had a dedicated irrigation technician previously at Losby Golf & Country Club, Duncan created a brand-new position and recruited a new member of staff to his team, Rudolfs Vaivods, solely dedicated to irrigation and with considerable irrigation experience. Rudolfs’ appointment brings expertise that will help Duncan’s wider team to realise the ambitions of the new General Manager and club to further improve the course and playing experience. 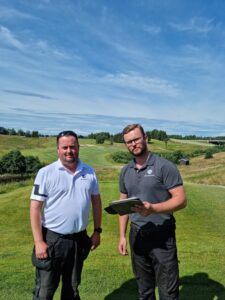 “The new system is more accurate. On the old holes, you had to have three heads on at the same time. What we have now, for example, are 64 sprinklers (rotors) on the 18th fairway alone, giving us the ability to fine-tune the irrigation down to a single sprinkler which makes our water use more efficient.

We’ve really noticed too how the climate is shifting. It’s intense anyway in Norway given the brief season. In summer it can be very hot, 30 degrees in the shade and with 21 hours of sunlight. We begin to winterise the system in mid-October, to shut it down for the long Norwegian winter and even then, it can vary wildly, from minus 10 to plus 10 degrees. In the winter here, there is no sunlight and where we used to have snow, in recent years there has been more ice than snow, which can actually be more damaging.

Coming from the UK, that stark difference was a real eye opener for me to begin with. In the UK, managing the course is a continuous process and you’re able to build on what you’ve done the previous season. Here, it’s completely different and you have to start afresh every year. There’s no continuity as, come spring, you literally have to start over. The challenge is squeezing everything into a shorter season where there’s very little leeway anyway. Golfers can play here right through till 11.30pm with the long, light evenings and play starts again at 8am.

A further challenge is the rising cost of electricity. There is a lake at Miklagard so while the water is free but running the pumps uses power which is becoming more expensive. Having an efficient irrigation system that limits unnecessary water use and corresponding pump activity will play an increasingly important role in our cost management. That’s where the mobile interface has also proved to be very helpful when it comes to managing irrigation and our time.“

You may also like these recent renovation success stories: